Research in the Jensen lab includes a variety of topics in fisheries science and ecology of aquatic ecosystems. Please follow the links below to learn more about our research on each topic.

Data from fisheries represent a tremendous opportunity to learn about the dynamics of populations, communities, and ecosystems as well as fisheries management (what works and what doesn’t). Raw catch data, unfortunately, can be misleading. Stock assessments, however, are often quite informative as they combine numerous sources of information to estimate the current and historical stock size and harvest rate. In collaboration with colleagues at Dalhousie University, the University of Washington, and several other universities and government labs throughout the world, we are building a global database of stock assessments.

Mongolia is home to several endangered salmonids, including taimen (Hucho taimen) and Hovsgol grayling (Thymallus nigrescens). Taimen are the world’s largest trout, reaching a record size of 210 cm (83 in) and 105 kg (231 lb), though individuals larger than 30 kg are rare. Hovsgol grayling are an endemic species of grayling found only in Lake Hovsgol. Two factors have made Mongolia a de facto refuge for many fish species: (1) there is little tradition of fish-eating, and (2) there is low human population density and low land-use intensity (little agriculture or urban development). Both of these are changing. Commercial harvest of fish increased during the years of Soviet occupation. Today there are several poorly regulated commercial fisheries in lakes and rivers as well as widespread poaching. Mining and increased grazing intensity threaten water quality. Our research in Mongolia is focused on the ecology and conservation of taimen and Hovsgol grayling as well as the aquatic ecosystems on which they depend.

Reliable data on the relative abundance of marine fishery resources are important for accurate stock assessment models and informing fishery management. Bottom trawls are commonly used to survey marine fishery resources, but they usually avoid complex substrates, such as reefs and shipwrecks. Therefore, there is a need for alternative or supplementary surveys using fixed-gears (e.g., traps, longlines, rod-and-reel) that are more effective at sampling these habitats and might provide a more reliable index of relative abundance for structure-associated species such as black sea bass, tautog, or lobster.

The Raritan River has experienced a wide variety of human impacts from pollution to development and dam building. However, water quality has improved and, in the past couple years, three dams have been removed. Dam removal should provide access to new spawning habitat for fish like American shad and river herring. These anadromous species return from the Atlantic Ocean every spring to spawn in the Raritan River where they were born. One remaining obstacle for migrating fish is the Island Farm Weir in Bound Brook, NJ. This low head dam just downstream from the confluence of the Raritan and Millstone rivers is equipped with a fish ladder. To evaluate how well the fish ladder is working, Rutgers scientists and students are tagging shad and river herring below the dam and monitoring their progress.

Diel vertical migration (DVM) is a commonly observed behavioral phenomenon among many different pelagic organisms. Organisms following a “classic” DVM trajectory occur at shallower depths at or above the thermocline at night and descend to deeper water at dawn. DVM behavior appears to be a means by which pelagic organisms balance the competing objectives of growing quickly and minimizing predation risk. For many visual foragers, feeding efficiency is greatest at the higher light levels near the surface during the day. Other visual predators, however, can also forage efficiently under such conditions so there is a risk to occupying environments that are ideal for feeding. We use mathematical models (visual foraging models and bioenergetic models) and field sampling (hydroacoustics, optical plankton counters, and trawls) to study DVM patterns and the tradeoff between risk and growth. Study sites include Lake Superior, a brackish bay of the Baltic Sea in Sweden called Himmerfjärden, and Lake Hovsgol in Mongolia.

Management and conservation of billfishes

Billfishes (Family Istiophoridae) such as blue, black, white, and striped marlin are among the largest and most highly prized marine sportfish. Yet much of their basic biology and ecology is poorly known and their populations in many parts of the world appear to have declined substantially over the past 50 years. These declines may be the result of overfishing by commercial longliners. Our research has focused on understanding the ecological role of billfishes within the pelagic marine ecosystem and on evaluating conservation measures such as releasing hooked billfish and closing some areas to commercial longline fishing. Much of our work has focused on striped marlin in the area near Baja California, Mexico.

Ice phenology and effects of climate change on lakes

Long term records of ice phenology, the timing of freeze and breakup, and ice cover duration have proven to be useful indicators of climate change. Ice phenology is sensitive to both water body-specific characteristics (e.g., depth, surface area, and elevation) and broader scale meteorological variables (e.g., temperature and snow depth). The interplay among these factors complicates the response of individual lakes to climate change. In collaboration with John Magnuson and Barbara Benson at the University of Wisconsin Center for Limnology, we have been studying temporal and spatial patterns in ice phenology change at scales from the Great Lakes region to the entire Northern Hemisphere. Much of the data that we use comes from citizen scientists who have kept records of freeze and breakup dates. We’re always interested in including new records of freeze and thaw dates in the database. If you know of any such records, please don’t hesitate to get in touch. 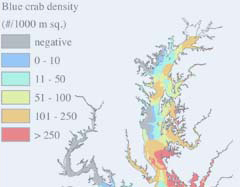 Most ecological data have a spatial component, e.g., a location where they were collected. In the past, analysis methods for ecological data tended to ignore spatial variability and spatial autocorrelation (similarity of samples taken close together in space). However, as new statistical methods have been developed, we can now take advantage of the ecological information contained in patterns of spatial variability and autocorrelation. One area of research interest in our lab is adapting spatial statistical methods for use with ecological data. For example, geostatistical methods are generally based on the straight-line (Euclidean) distance between two locations. In environments like estuaries, however, the distance between two points as the crow flies can be much different than the distance between those points as the crab swims. We developed a modified approach to calculating variograms and kriging that is based on a lowest-cost path distance (e.g., the shortest distance entirely through the water) and implemented within a GIS (ArcMap).