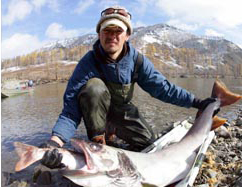 Mongolia is home to several endangered salmonids, including taimen (Hucho taimen) and Hovsgol grayling (Thymallus nigrescens). Taimen are the world’s largest trout, reaching a record size of 210 cm (83 in) and 105 kg (231 lb), though individuals larger than 30 kg are rare. Hovsgol grayling are an endemic species of grayling found only in Lake Hovsgol. Two factors have made Mongolia a de facto refuge for many fish species: (1) there is little tradition of fish-eating, and (2) there is low human population density and low land-use intensity (little agriculture or urban development). Both of these are changing. Commercial harvest of fish increased during the years of Soviet occupation. Today there are several poorly regulated commercial fisheries in lakes and rivers as well as widespread poaching. Mining and increased grazing intensity threaten water quality. Our research in Mongolia is focused on the ecology and conservation of taimen and Hovsgol grayling as well as the aquatic ecosystems on which they depend.

Growing recreational fisheries for taimen offer an economic incentive to conserve healthy taimen populations but may also result in unsustainable levels of fishing mortality. Along with colleagues at the University of Wisconsin and the University of Nevada, we examined this tradeoff for a recreational catch-release fishery for taimen on the Eg and Uur rivers in north-central Mongolia. The impact of this catch-release fishery is quite small – largely because of the high release survival, 90-95% – and does not threaten the persistence of the population. However, some of the scenarios we examined were not so benign. For example, if the fishery were not catch-release and all taimen were instead kept and killed, a fishery of this size would likely (57% chance) lead to the eventual extirpation of the population. Expansion of subsistence fishing (or poaching) could also seriously threaten taimen, although our estimates here are very rough.

Lake Hovsgol (or Khövsgöl) is the source of the Eg River and Mongolia’s largest body of fresh water (17th largest freshwater lake in the world by volume). In summer 2009, we joined with colleagues at U. of Wisconsin, U. of Minnesota, and the Mongolian Academy of Sciences to sample the fish and zooplankton communities of Lake Hovsgol with a focus on Hovsgol grayling. The good news is that Hovsgol grayling are still abundant – they were caught at all sample sites and the hydroacoustic surveys indicated relatively high abundance in the pelagic waters. The bad news is that several of the tributaries in which Hovsgol grayling previously spawned have now dried up leaving only a handful of remaining spawning tributaries. Grayling are particularly vulnerable to poaching during their spawning runs, and though Lake Hovsgol is a National Park, poaching is common.

Funding for our work in Mongolia has come from the National Science Foundation, the Trust for Mutual Understanding, the Mohammed bin Zayed Species Conservation Fund, and the National Geographic Waitt Grant Program. Our Mongolian collaborators are funded through a cooperative USAID-NSF joint program.